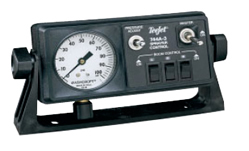 The conversion kit just plugs into the quick coupler your discharge hose plugs into. 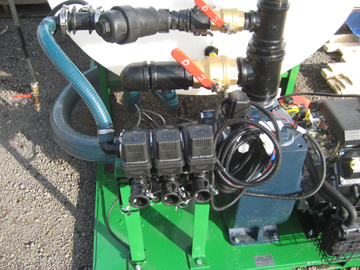 The photo above shows the conversion to adapt a Turbo Turf HS-300-XPW to an ice control sprayer. The conversion kit plugs into where the hydro seeding discharge hose usually goes and the electric ball valves shown above control the flow to each of the three boom sections. The three hoses on the boom plug into the quick couplers mounted at the front of the unit.

Turbo Turf jet agitated units that can be used for Ice Control are all units 300 gallons except the HS-300-E8. . The 50, 100 & 150 gallon units as well as the HS-300-E8 can be used with any chemical that does not affect aluminum. The Hybrid series of Turbo Turf paddle agitated hydroseeding systems may also be used. Other brands of jet agitated machines may also be converted but may need some modifications.

Our shopping cart will not automatically add freight.   We shop many freight companies to find the best price for our customers and will confirm the freight with you before we charge the credit card.